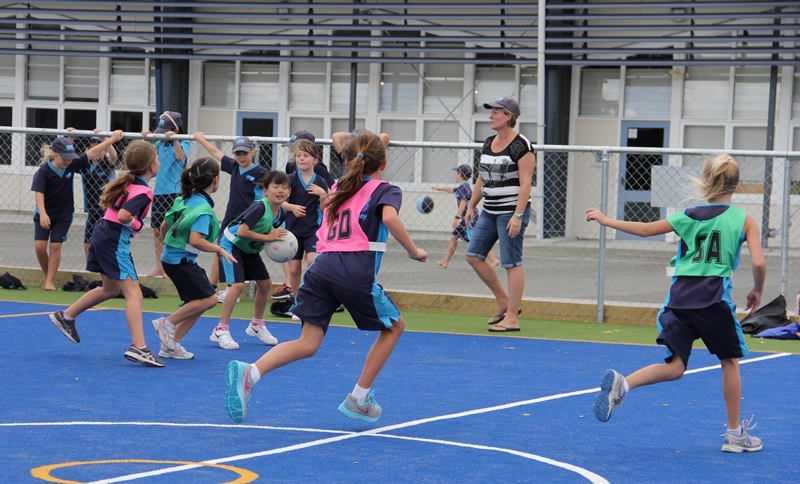 Selected teams play in this competition on Wednesday evenings at Barfoot and Thompson Stadium, Northcote.

Fees per player: $85 + umpiring fees to be determined and collected by the coach/manager

Game times: 8.45am until mid-afternoon. Time for the final game depends on the number of teams involved in the league.

Fees: $60 + umpiring fees to be determined and collected by the coach/manager

All fees are to be paid via the school bank account. Please use your child’s name and ‘Netball’ as reference.

Children play a non-competitive league 6-a-side version of netball.  They have two centres, two attackers and two defenders (bibs are provided). They play with size 4 netball, 1.8m (6ft) goals on a ¾-size court. If providing your own umpire for this age group they must be an adult willing to work with their mentors.

Play with size 4 netball, 2.3m (7ft 6in) goals on a full size court. Children play in the traditional positions of netball but the main emphasis is on the understanding of passing of the ball down the court towards their goal and then shooting a goal. Games are 2 x 15min halves with a 2min break at half time.

Play with size 4 netball, 2.6m goals on a full size court.  The players quickly develop their skill and understanding of netball.

Students will be trialled at school during lunchtime for Year 4,5 & 6 – Dates to be confirmed. Please note that a registration form must be completed and payment must be made before the trial dates.  Please also ensure your child has the correct shoes to trial in and that long hair is secured back. No player will be considered for top team selection unless they trial.  Please refer to Sports Handbook for top team selection process.

Trialing can be an exciting and/or stressful experience for children and parents, especially for those who are anxious to improve their skills or worrying for those who find themselves in a different team, not with their friends. The reason for it is to help enable those with like abilities to play together, but also open the door for new players. A representative from Netball North harbour will conduct our trials and we do our very best to ensure team selection is as fair as possible.

Please have a discussion with your child before the trials and assure them that whatever team they find themselves in, they will still have every opportunity to improve both individual skills and team spirit.

Once the trials are complete, teams will be formed based on the abilities during the selection process and parents informed. All trials are final and are not up for negotiation.

The role of the coach is to train their team of children on a weekly basis. School will provide an opportunity for court times and it is the coach’s responsibility to ensure that their team practices on a regular basis. It is also the coach’s responsibility to attend their team’s games and to provide support and guidance where necessary. The coach will work alongside the team Manager to ensure all children are informed of their weekly game time and positions for each game.

The role of the Manager is to collate team information and inform parents and children weekly of their game times. The managers will work alongside the team coach and attend their team’s games.

The Manager / Coach must ensure that the students sign the Code of Conduct form before the competition begins.

The role of the Umpire is to attend games to umpire their team’s game weekly. Umpires will need to attend the training sessions if they have not umpired before and it is strongly encouraged that umpires attend the Umpiring courses regularly to up skill on the game of Netball.

MBS sports uniform and sports shoes. Year 4-6  players will be provided with a netball dress. Hair must be tied back, nails short & no watches or jewelry allowed